En route to Thebes for an important diplomatic mission, Hercules (Steve Reeves) drinks from a magic spring and loses his memory. He then spends most of the film in the pleasure gardens of Queen Omphale of Lydia (Sylvia Lopez). While young Ulysses (Gabriele Antonini) tries to help him regain his memory, political tensions escalate in Thebes and Hercules' new wife Iole (Sylva Koscina) finds herself in mortal danger. Also with Primo Carnera as Anteo The Giant.

This was to be one of Sylvia Lopez's last film appearances. She was to die from leukemia on November 29th, 1959, just 10 months after this film was released. She was 27.

Lopez died while playing the character of Anita Flores in Sexy Girl (1959), which starred Brigitte Bardot. Her scenes were later remade with Dawn Addams taking over the role. 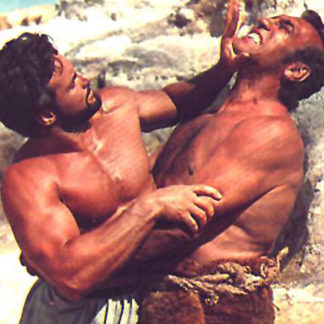