Set in the shadows of Mt. Vesuvius just before its famous eruption, the film begins with Glaucus (Steve Reeves), a Roman legionnaire, returning to his home from far-off wars. Upon arriving, however, he discovers that his father has been murdered by a gang of black-hooded looting bandits. Glaucus vows revenge against the killers, but just how high up are those involved?

During the production of this film, Steve Reeves suffered a major injury. A chariot he was driving struck a tree and dislocated his shoulder. The injury never fully healed, putting an end to the more intense bodybuilding routines he was used to.

Be the first to review “Last Days Of Pompeii, The (1959)” Cancel reply 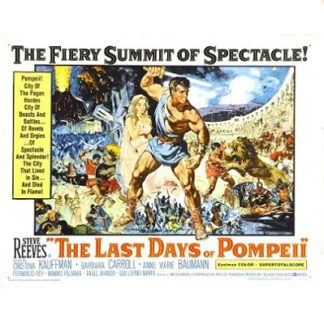