View cart “3 Supermen Against The Godfather (Italian Language Version) (1979)” has been added to your cart.

aka: Santo vs. Baron Brakola

The action opens in the past with an ancestor of El Santo, who also fights against evil. In so doing, he goes up against the rich, but the unsavory Baron Brakola (Fernando Osés) is interested in a local girl named Rebecca (Susana Robles). When she refuses him, the Baron is incensed. The girl's family then calls in Santo's ancestor to prevent tragedy, but Brakola turns the girl into a vampire. The best El Santo can do is to drive a stake through her heart, releasing her spirit. Brakola then returns to his coffin. In the present day, Brakola assaults a descendant of the dead girl's family and Santo enters into the fray. The Baron is now after the girl, meaning to make her a vampire as well. Sensing history about to repeat itself, Brakola replaces one of Santo's ring foes and attacks him in during the match. However, he fails to kill Santo and the wrestler then finds a map to the Baron's home. Then later he arrives there to again confront the Baron in another fight, before staking him into permanent submission. Also with Mercedes Carreño. (In Spanish language). 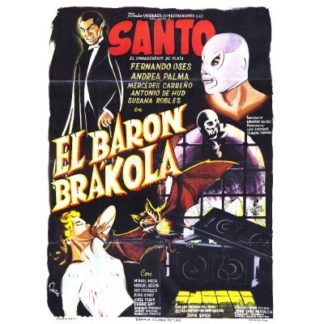