A horror story writer, Edmond Blackstone (Jonathan Frid), suffers from a recurring nightmare in which three bizarre figures terrorize him and his family. When Blackstone begins to write, the three figures appear at his home and the dream becomes reality. Also stars Martine Beswick and Joseph Sirola. Also with Hervé Villechaize of Fantasy Island fame. Directed by Oliver Stone.

In the early morning hours of September 4th, 1993, Hervé Villechaize’s common-law wife found his dead body laying on their patio. He had written a suicide note and proceeded to his backyard with a tape recorder. He turned on the tape recorder and spoke, “Kathy, I can’t live like this anymore. I’ve always been a proud man and always wanted to make you proud of me. You know you made me feel like a giant and that’s how I want you to remember me…I’m doing what I have to do…I want everything to go to Kathy…I want everyone to know that I love them.” In a sitting position, Hervé leaned back against a sliding glass patio door, placed a pillow against his chest and then fired a pistol into the pillow, taking his own life. He was 50 years old. 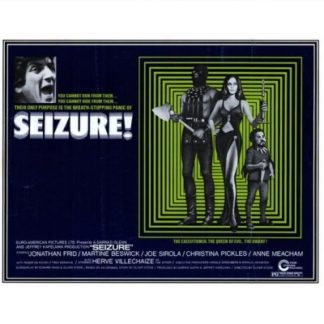