The Yang family, men and women, had served their country (Song Dynasty) loyally for generations. During the war with Western Xia, General Yang Tsung-pao (Hua Chung) is ambushed and killed. His death leaves his only son, Yang Wen as the only male heir left to the Yang family. His widow, Mu Kuei-ying, the grand matriarch and the entire family set out to avenge his death and defend the country. Due to the interference of a corrupt official, Wang Ching, the Yangs were unable to have the emperor's consent to use the imperial army. Thus, they set off with whatever volunteer troops they could muster. Knowing of Mu Kuei-ying's reputation as a warrior and tactician, the king of West Hsia and his sons try various ways to stop her to no avail. They are outsmarted at the end as Mu Kuei-ying (Ivy Ling Po), the Yang family and Sung soldiers successfully storm their stronghold. Also stars Mei Sheng Fan and Chung-Hsin Huang. Also with Betty Ting Pei and Bolo Yeung. Widescreen format. (In Chinese language, with English subtitles). 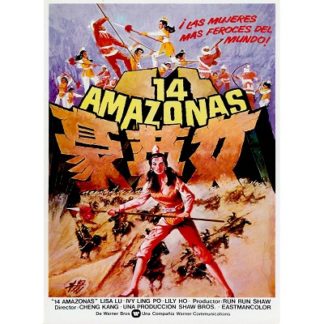