aka’s: Ken Russell’s Film Of The Devils/The Devils Of Loudun

Cardinal Richelieu (Christopher Logue) and his power-hungry entourage seek to take control of 17th-century France, but need to destroy Father Grandier (Oliver Reed), the priest who runs the fortified town that prevents them from exerting total control. So they seek to destroy him by setting him up as a warlock in control of a devil-possessed nunnery, led by the Mother Superior (Vanessa Redgrave) of which is sexually obsessed with him. A mad witch-hunter (Michael Gothard) is brought in to gather evidence against the priest, ready for the big trial. Also with Kenneth Colley (aka: Admiral Piett in Star Wars Episode V: The Empire Strikes Back and Star Wars Episode VI: Return Of The Jedi).

NOTE: This is Ken Russell’s uncensored director’s cut, which was thought to be lost and includes the much sought after “Rape Sequence”, which was removed from all theatrical prints.

The film graphically portrayed violence, sexuality and religion. This caused it to face harsh reaction from censors, and it originally received an X rating in both the United Kingdom and the United States. It was banned in several countries, and heavily edited for release in others. In most countries the film has never been released in its original, uncut form. Critics also dismissed the film for its explicit content, though it won the awards for Best Director at the Venice Film Festival, as well as from the U.S. National Board of Review. ~ Wikipedia

The Devils aka’s: Ken Russell’s Film Of The Devils/The Devils Of Loudun

Be the first to review “Devils, The (Uncensored Version) (1971)” Cancel reply 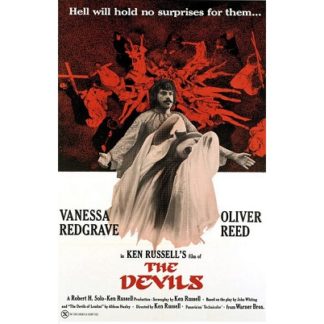