An airplane carrying three outstanding scientists crashes. Zovek, using his great psychic powers, learns that two of the scientists died. The third one, Professor Druso, gets off the plane in Los Angeles, leaving a bomb on board. Druso plans to use the works of the deceased scientists to transform people into monsters or cannibal midgets.

Zovek was a Mexican TV star who routinely performed escapes, acts and stunts. He reportedly once performed 17,800 sit-ups (without stopping) for 8 hours, the last 200 taking his own secretary over his head with his hands. He also once swam 8 hours without stopping on a TV show to get money for the Red Cross. He later skipped rope for almost 9 hours for the same cause.

On March 10th, 1972, Zovek fell 200 feet to his death out of a helicopter during the filming of Blue Demon And Zovek In Invasion Of The Dead (Also available here at Rare Movie Collector) one week before he was to appear in Tokyo courtesy of the Fuji Telecasting Company.

Be the first to review “Incredible Profesor Zovek, The (1972)” Cancel reply 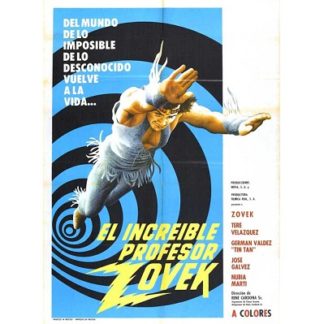