An heirless businessman (George Coulouris), in charge of a self-made financial empire, discovers that he is dying from a brain tumor. Hoping to ensure the continued expansion of his power and wealth, he gets in touch with a group of experimental scientists who try to resurrect the disembodied head of the long-dead, 16th century prognosticator, Nostradamus (Michael Golden), whose brain the businessman intends to have implanted into his own healthy body, in order to have the power of prediction in business….ending with dire consequences. Also stars Robert Hutton and Julia Arnall. Also with Nadja Regin, Sheldon Lawrence and Kim Parker.

The Man Without A Body 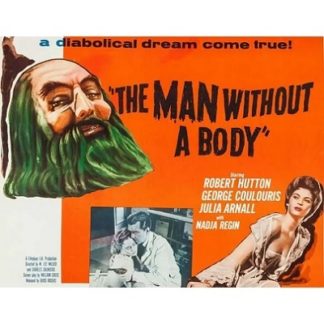