A journalist, Nora (Miroslava), is ordered by her boss (Fernando Wagner) to check on an advertisement placed by Dr. Hermann Ling (Linares Rivas). Ling turns out to be a disfigured creature who, rejected by his peers, has become a mad scientist, specializing in plastic surgery. He falls in love with Nora but fearing she will betray him he resuscitates a young man who committed suicide, Ariel (Carlos Navarro), by transplanting a new brain into him, and orders him to fetch Nora so that he can kill her. However, Nora and Ariel fall in love, and the zombie turns on his master. (In Spanish language, with English subtitles).

Be the first to review “Revived Monster, The (1953)” Cancel reply 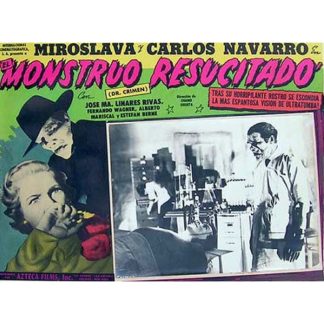