aka: The Indian Superman

In this Indian take on the classic superhero story, a young baby from the doomed planet Krypton is sent to Earth, where he is adopted by an elderly couple in India who name him Shekhar. After growing to an adult and learning about his origins and powers, he goes to the city in search of his school sweetheart, Gita, who has become a newspaper reporter. At the same time, Verma, Shekhar's rival for Gita's affection in their school days, has gone on to become a crime lord and general super-villain. Verma has hatched a plan to become rich by devastating part of India with natural disasters, then buying up all of the abandoned land. Will Superman/Shekhar (Puneet Issar) be able to put a stop to Verma's evil plan? Will he win Gita's heart? Will he keep his double identity a secret? (In Hindi language).

Includes the original Indian commercials, which are stranger than the film itself.

The Hindi Superman aka: The Indian Superman

Be the first to review “Hindi Superman, The (1987)” Cancel reply 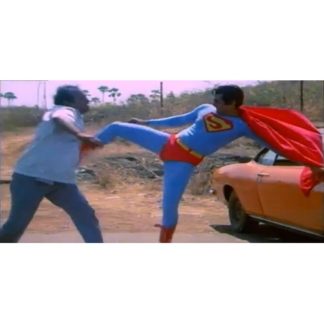