View cart “Starship Intercourse (1987)” has been added to your cart.

aka: Welt Am Draht

At the Institute for Cybernetics and Future Science, a new supercomputer hosts a program called a simulacron that includes an artificial world with about 10,000 identity units living as human beings with developing consciousness. However, these units are unaware that their world is just a simulation. Professor Vollmer (Adrian Hoven), the head of the institute, apparently close to an incredible discovery, dies in a mysterious accident. His successor, Dr. Stiller (Klaus Löwitsch), has a talk with Guenther Lause (Ivan Desny), the security adviser of the institute, when Lause suddenly disappears without a trace before he could pass Vollmer’s secret to Stiller. More mysterious is the development that none of the other employees have any memory of Lause. Also with Barbara Valentin, Mascha Rabben, Karl Heinz Vosgerau and Wolfgang Schenck. (In German language, with English subtitles).

World On A Wire aka: Welt Am Draht 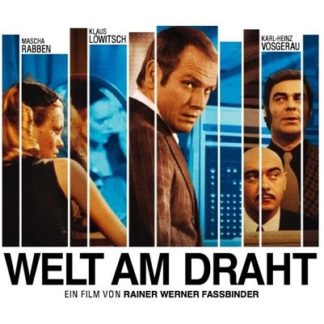