aka's: Cries In The Night/The Cry Of Darkness/Schreie Der Nacht

A young woman (Lesleh Donaldson) arrives at her grandmother's house, which used to be a funeral home, to help her turn the place into a bed-and-breakfast inn. However, after they open, guests begin disappearing and turning up dead. Also stars Kay Hawtrey and Barry Morse (of Space: 1999 fame). Also with Dean Garbett and Stephen E. Miller.

Trivia: According to Canadian film actress, Lesleh Donaldson, this film is quite a popular cult classic in Mexico.

Canadian film company, Frontier Amusements, released this film in Canada on October 3rd, 1980, as Cries In The Night, then later re-released the film in the U.S. on August 12th, 1982, as Funeral Home.

Be the first to review “Funeral Home (1980)” Cancel reply 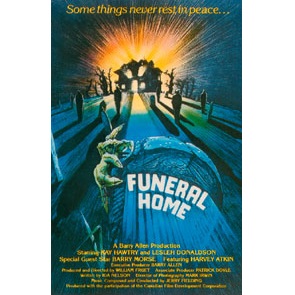