A white U.S. Senator (Joseph Mascolo), looking to improve his standing among black voters, sponsors a drive for the CIA to recruit black agents. However, everyone is graded on a curve, so all are condemned to flunk…except for soft-spoken Dan Freeman (Lawrence Cook). After going through grueling training in self-defense, guerrilla warfare and underground operations, he is recruited to be a “reproduction chief” (he runs a photocopier in the sub-basement) and serves the CIA as a token black employee (the term “spook” used here is both a racial slur and a slang term for a spy). After 5 years, he leaves the CIA to work in his native Chicago for a social services agency…by day. By night, he’s using his CIA training to teach a street gang to be the vanguard in an upcoming race war! Also stars Janet League and Paula Kelly. Directed by Ivan Dixon of Hogan’s Heroes fame.

Three weeks after its release, this film was removed from theaters as a result of its politically controversial message. The film-makers insisted that it was from pressure on the film’s distributors by the FBI and their COINTELPRO program against black nationalist groups.

The Spook Who Sat By The Door 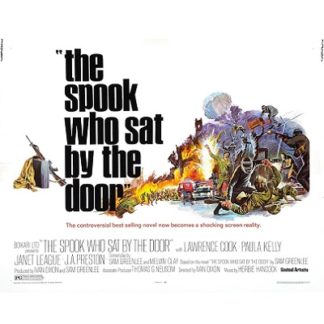